I recently had the opportunity to sit in the studio audience for an edition of chasejarvisLive.  Let me say, this was a pretty neat thing for me.  I got to take a trip up to a part of San Francisco I have never been to before to visit the brand new CreativeLive Studios in San Francisco.  WOW!  It was a great neighborhood and a beautiful building.  For those of you who don't know, CreativeLive is my photography and entrepreneurial learning mecca!  I'd drive to SF everyday to work at CreativeLive (no disrespect to my current day job...but it's just...CREATIVELIVE!).  Ok.  Enough fan-girling.  Here's a look at the lobby! 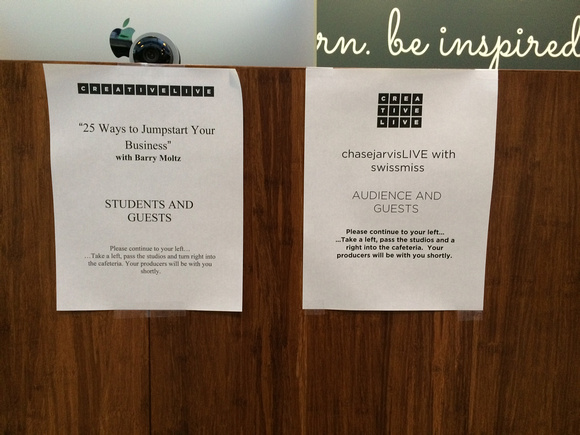 As you can see from the photo above, Chase's guest was Tina Roth Eisenberg aka Swiss Miss.  In brief, Tina was Chase's inspiration to create a voice for himself as a photographer on the internet, becoming one of the first photo "personalities" online that people were drawn to.  Now he's co-founder of CreativeLive and many other amazing things.  The theme of this discussion was "Your Side Project is Your Next Big Win".  Tina spoke about the evolution of some of her side projects such as Creative Mornings and Tattly amongst other things.  The big take away was don't be afraid to try out your ideas because you may hit on the something and you'll never know until you try.

At the end of the broadcast, I hung out to take a minute to say hi to Chase and get a picture with him.  I didn't freeze completely, but I did forget what I wanted to say when I met him, so I just thanked him for all he's offered the photographic community and for helping birth CreativeLive.

All in all, it was a great experience.  I hope that I can visit the CreativeLive studios again as a guest for a future broadcast.  I'm continuously trying to be inspired.  Thanks, Chase, for all the new inspiration!